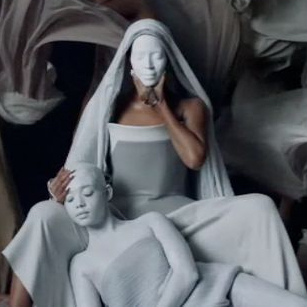 Although this is my last piece inspired by 4:44, the topics I will address have been on my mind for a long time. For example, one idea was another spin off of “Never Change 2.1,” that focused on Hova’s lyrics about his wife, daughter and mother, but I put it on the backburner in another kitchen somewhere in Brooklyn. However, when Shawn Carter outed his mother, Gloria, on “Smile,” it added fuel to a few lowly lit ideas that were waiting to turn up.

For me, Ms. Carter outing was more than revealing her sexuality. It was about her being comfortable in her own skin, and using a mask to protect her children. In Jay’s songs, when he mentions his mother there is usually a legal/criminal connection:

“Lucky Me,”—Gimme any amount of time don’t let Ms. Carter grieve at the funeral parlor drippin’ tears on my sleeve

“Not Guilty”—I know stress, drama, ni—as upsettin my mama/Arrested, put in the lineup, trying to put dents in my armor

“Holy Grail”—Enough to make me wanna murder/Momma, please just get my bail

Ms. Carter was one of those many mothers who prayed and warned their children about the ills of the streets, and Jay is one of those children who reassured their mother that her nightmares would never become a reality (Shawn is one of the lucky ones). To prevent Gloria from crying, Jigga rather do time than die. The music mogul’s hustling was to ensure his mother never wanted anything. And should he get in trouble, that first phone call is going to mom dukes to bail him out because she’s his savior. (Between us, I think Ty Ty [if he’s not locked up, too] would get the call before Mama Carter). They protect each other.

I would be remiss, however, if I didn’t mention Shawn’s “heinous act” of selling drugs to his mother (“You Must Love Me”, In My Lifetime Vol 1.). He exposed her drug addiction in 1997, but it took 20 years to reveal her sexuality. I think it’s safe to say that at that time, the world would accept a former drug addicted mother than a mother who is a lesbian.

“…Somewhere along the journey from slave to soul sister to single lady, we did learn how to shapeshift. We learned how to make our own magic, and it all started with an ancient face–lips pursed, cheeks flattened, eyes straight ahead…but the mask can be both a necessary tool in our arsenal and a gun to our inner heads.”
Helena Andrews, “Reserve,” Black Cool

To protect her son from any negativity, Ms. Carter hid her sexuality in the shadow (mask). Now, she is free. But what about the other Black women? Especially those who lost their children to extrajudicial killings. They have always had a poise that I admired, but used to perplex me. I know that people express their pain differently, but I wondered where was the outrage? Where was the fury of having to bury your child then defend the child’s character to the media and courts because they were Black?

I now realize that for a long time some of these mothers may have been wearing masks to protect their dead children from public scrutiny. Moreover, they, too, were under the gaze and any slip up would translate into “Well, you see how the mother acts, her child’s death must have been warranted.” These mother’s couldn’t be justifiably angry Black women (Sapphire).* No, no, no! You don’t want to be labeled as a Sapphire because you have to tell your child’s story and who is going to listen to you when you are not acting—dare I say­—ladylike?

When I heard Sandra Bland’s mother declare, “Once I put this baby in the ground,” said Reed-Veal, “I’m ready … this means war.” It surprised me. Then came Valerie Castile, mother of Philando Castile, who died after being shot by a police officer in his car. She assertively checked reporters and informed them that her son a law-abiding citizen who was constantly racially profiled. She knew what to say and how to say it. If anyone tried to make her son accountable for his death, it was not happening on her watch. She stressed how the city her son loved killed him. When the verdict came in and she expressed her frustration and disappointment. Castile also made another video that was more explicit about how she really felt. Some say it’s the sociopolitical culture we live in. I question whether these mothers after having all these talks with their children, living in fear and having their nightmares turn into realities have just had enough and now, like Auntie Maxine, are reclaiming their time.

* I recommend reading Sister Citizen by Melissa Harris-Perry about the tropes ascribed to Black women.