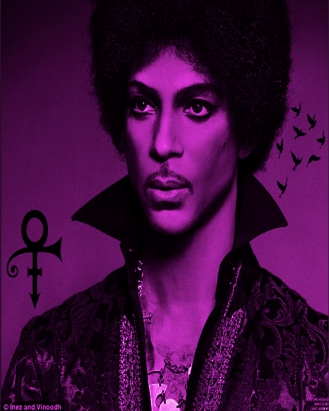 I have so much to do. My roles and responsibilities grow as the days go by, but I had to take a moment to pay respect to a muse who has gotten me through some of my most challenging times: Prince.

His full name, birthday, albums and accomplishments can be Googled, but his impact can’t be measured, no trending stats, awards, album sales or radio play will ever be able to capture the icon that he is.

As a ‘80s baby who watched MTV (you know, when they played videos) and having a father who loved watching Purple Rain, Prince was a part of my childhood. At first, he was obscure to me; I used to wonder why was he so pretty, but hearing his music and watching his videos, there was no denying our bond. I danced and lip-synched to my heart’s content when he (and the other pop icons) came on the screen or radio, I put on a production, hell, I still do—let me hear that guitar strumming followed by “Ugh!” from “Kiss!” Just give me my space. Seriously.

Some of the greatest life lessons can be found in music, and Prince was one of my many teachers. His discography covered the spectrum, from the racy to the socially conscious. I remember when “Sign O’ The Times” and “Money Don’t Matter 2 Night” came out during the crack epidemic and how they resonated the social conditions that I saw on daily basis. His lens showed America what was happening on the block.

As a teacher, the most important lesson Prince taught me, was resistance. The Purple One changed his name into the Love Symbol, which couldn’t be pronounced (he was introduced as “The Artist Formally Known as Prince”) and he wrote “SLAVE” on his chiseled cheek as a protest to his record label, Warner Bros. Prince wore make up and heels with the fiercest hairstyles to rival any of your aunties, but no one could deny his masculinity. He defied conformity and resisted labels. “I’m not a woman/I’m not a man/I am something that you’ll never understand.” He did it his way.

As I embark on a new journey, a few incidents presented themselves and made me think of resistance. A lot of people came to mind, but Prince stuck out as one of those people who resisted gracefully. It’s easy for some to lose their essence on their journeys in “this thing we call life”, but I decided that’s not the route I will be taking. I can’t guarantee grace all of the time; I have too much fire and passion. However, remaining true to my goals and myself is something I will definitely be doing, especially with some funky grooves from “The Kid.” How do you measure that?